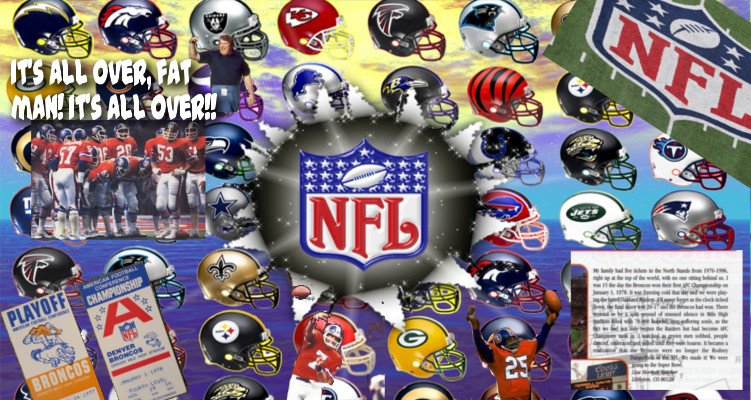 I’ve never seen so many grown men cry in one place in my life and probably never will again.

It was New Year’s Day, 1978, at Denver’s old Mile High Stadium. I was in the north stands with my family, like every home game, but that day was different. That day, the Broncos won their first AFC Championship. And grown men cried. 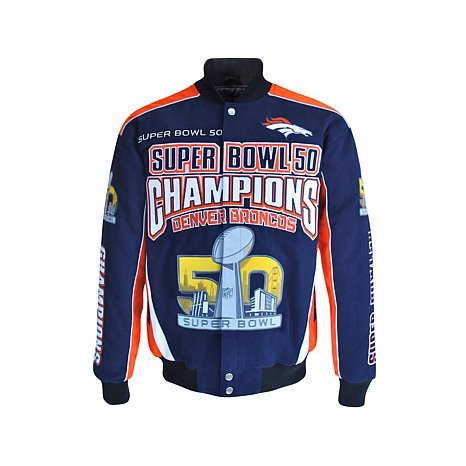 The Broncos have just won Super Bowl 50, and I’ll bet not a few fans cried (I was one of them). We’d waited nearly two decades for another Super Bowl win, and we finally got it with Peyton Manning at the helm and a defense that hearkens back to the 1977 Orange Crush. As a matter of fact, at the beginning of the season, my friend John, a bitter, long-suffering KC Chiefs fan, mentioned that Manning was beginning to remind him of Craig Morton. John used to joke that they had to wheel Morton out on to the field on a dolly for every game.

This season has been reminiscent of that golden Broncos season of 1977 in many ways, but it had a far better ending. I’m grateful to our team for bringing the Vince Lombardi trophy back to its rightful home. I’m grateful that one of the all-time great quarterbacks, Peyton Manning, gets to go out on top where he belongs. I’m grateful to the best defense in the NFL. I’m grateful, most of all, that the Broncos have reminded me of the great life lessons of 1977.

That 1977 Cinderella season started off dubiously—with Red Miller, the Broncos’ brand-new, untested coach, and Craig Morton, a broken-down, has-been, ancient (he was 34) quarterback. But as we did every year, we hoped for great things, even though we’d experienced only three winning seasons in the Broncos’ 18-year history.

Our first inkling that the ’77 Broncos were something special came on October 13, 1977, when the Broncos beat the Oakland Raiders in Oakland for the first time ever. We were so gobsmacked by this that my family drove straight out to Denver’s old Stapleton Airport to welcome the team home.

You could never get away with that today, of course. We lined the concourse right up to the jetway door, waiting for the team plane. It was sweaty and loud in there, and we fans were as delirious with happiness as the team members, who debarked the plane and giddily doled out hugs and handshakes, posed for Kodak photos, and accepted gifts and tearful congratulations.

One moment sticks out, though. We tailgated outside the stadium before each home game with the Gray family, who accompanied us to the airport. Their oldest son, Jerry, was twelve at the time, and he had recently attended a player signing event at a Denver car dealership. Legendary linebacker Tom Jackson, one of the funniest, most talented men to ever play the position exited the plane. (That was the Oakland game where Tom trotted to the Raiders’ sideline and hollered to coach John Madden, “It’s all over, fat man! It’s all over!” He also regularly called Madden “The Egg.”) As Jackson burst through the plane door, Jerry seized his hand. “Hey, Tom!” Jerry said. “Remember me? I got your autograph at Sill-Terhar Ford!”

And what did TJ say? “Aw, hell, kid. All you whities look alike to me!” Then he crushed Jerry in an ecstatic bear hug.

The Raiders beat us at home just two weeks later, and it was one of only two losses that season—the second was to the Cowboys in Dallas. With each succeeding win, we grew more anxious and hopeful. Was it possible? We just couldn’t picture what it would look like to play in The Big Game. 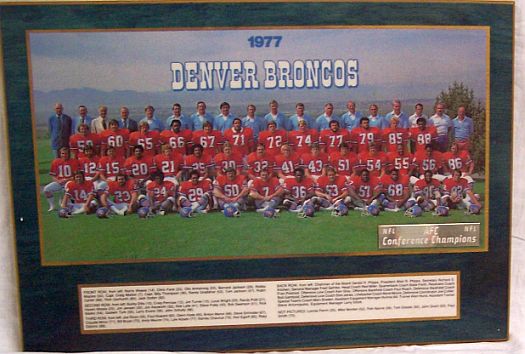 Even before this big season, my family were devoted Broncomaniacs. These were the times of my family’s life, and we have a giant box full of Bronco memorabilia—ticket stubs (that year, our seats were $12 apiece), banners, programs, shirts, autographs. My dad belonged to the Denver Bronco Quarterback Club, we went to training camp every year, and we counted the days until pre-season started. We wore orange every Sunday and memorized all the players’ names and numbers. I can still remember the ’77 roster today.

The Broncos clinched their first-ever playoff spot and home-field advantage with the best record in the AFC at 12-2. Their first opponent was the Pittsburgh Steelers, who were at their peak, and the game fell on Christmas Eve. What I remember best from that game was Mean Joe Greene’s epic frustration. He was so frustrated, in fact, that he was ejected from the game for punching first our center, Mike Montler, and then our opposing guard Paul Howard so hard that he crumpled to the field. We were able to see it from clear up at the top of the north stands.

Christmas came early that year when we won decisively, 34-21.

One week later, on New Year’s Day, 1978, we played in the AFC Championship. It was freezing but sunny that day, and we all told each other it was enough just to get this far. If we didn’t make it to the Super Bowl, at least we got to see the playoffs at home. But as we faced our arch-rivals, the evil Oakland Raiders, it soon became clear that it was all happening. 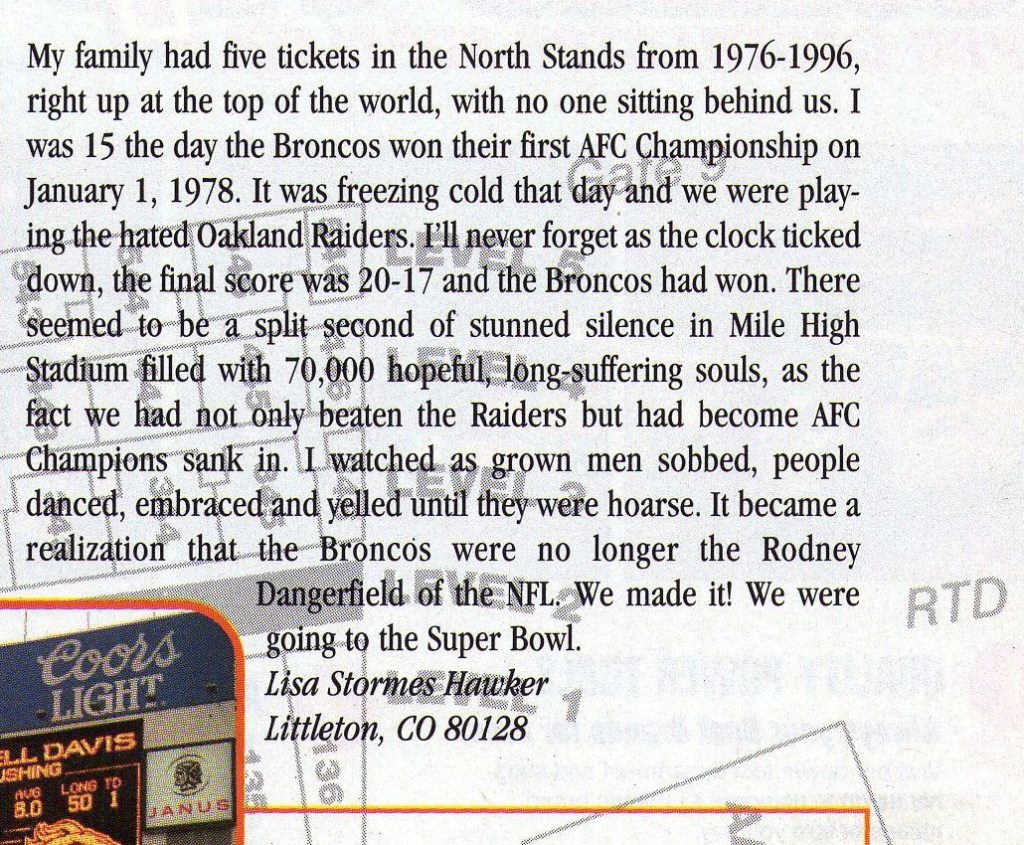 The old Mile High was one of the loudest stadiums ever, and was designated the biggest home-field advantage in the NFL at one time. We rocked that place, never more so than on that day. When fans stomped their feet, the old steel structure swayed and bounced, and players could feel it down on the field. But after the clock ticked down to zero on January 1, 1978, and the final score was Denver 20, Oakland 17, there was a beat of absolute silence.

That silence was pure disbelief. We’d been the Rodney Dangerfields of pro football nearly from the the Broncos’ first kickoff (vs the Patriots at Boston University’s Nickerson Field) thanks to the Broncos’ comical vertically striped socks, the city’s reputation as a cowtown, and the team’s membership in the outsider AFL. So no one was more surprised that we were actually going to the Super Bowl than the fans.

And that beat of stunned silence said more than all the cheers that followed it.

It was the first time in my life I felt I belonged to something greater than myself, my family, my little world. It was the first time I witnessed 75,000 people share a common goal and set of emotions at the same moment, celebrating and rejoicing and reveling in victory together. As corny as it sounds, that moment cracked open the universe and proved to me that hopes could be realized and that absolutely anything was possible.

Up at the top of the world, the north stands of Mile High Stadium, my family watched as the fans poured onto the field and ripped down the goalposts. My brother, sister, and I watched enviously, and finally Mom and Dad allowed us to join the action on the ground. It was like being told we could enter and loot the Forbidden City.

The three of us ran down five levels and threaded our way through the throng, sharing hugs, smiles, tears, laughter, and joy with our massive extended family. We made our way toward the center of the field. There lay the NFL logo, painted on the turf. Lori, Rob, and I kicked up part of the “N.” We carried it out of the stadium, took it home, and planted it in our backyard.

For my family, that piece of turf came to symbolize the endurance of hope.

Like the Broncos, the darkest of times came for my family just a few years later, and also like our team, they stayed for a long, long time. The Broncos went on to lose more Super Bowls than any other team in NFL history. But thanks to that moment of victory and the stolen sod, we could all look back and cling to those feelings, that unity, that joy. When the darkness came, we could go outside and run our fingers through our little piece of sports and family history, and still believe that anything was possible. We could remember that even in the worst of times, hope endures.

Because years after that, the sun came out again, both for my family and for the Broncos. And that sun shone bright last Sunday, when the Broncos, in spite of past failures and against the odds, won their third Super Bowl.