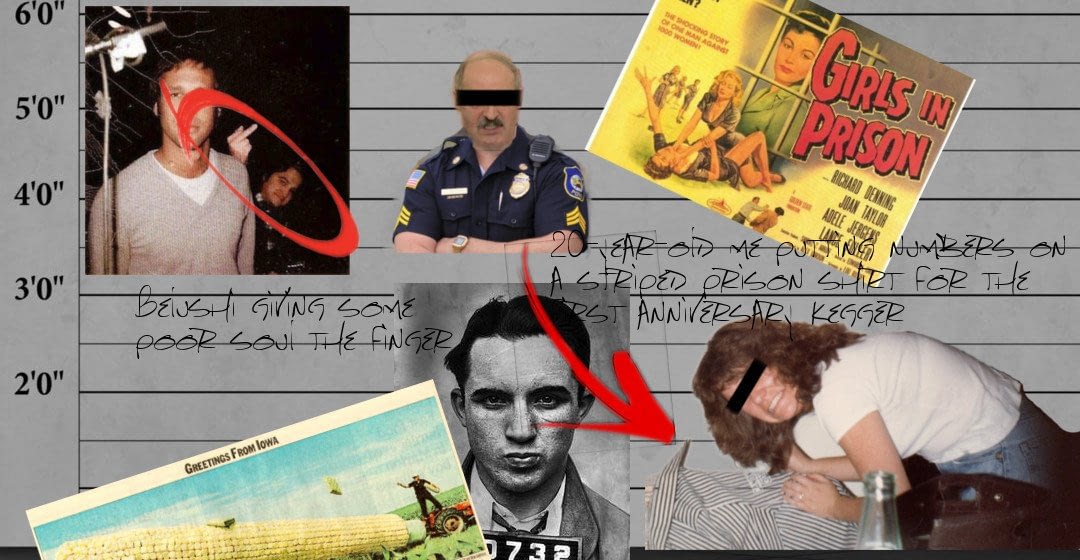 Today is the anniversary of my arrest.

My sophomore year of college, I took a semester off to work at a Colorado mountain resort so I could enjoy my latest existential crisis at altitude. I would get to live the dream: earn $3.35 an hour, sleep in what amounted to a broom closet with bunk beds, and ski during my free time.

Sometimes, after the tourists vamoosed, the staff would have keg parties up at the top of the mountain and ski down after midnight by moonlight. On sunny days, we’d ski to a top-secret clearing in the heart of the forest and stick our skis in the snow for chair backs, catch some rays and maybe imbibe a little.

In exchange for these privileges, I worked the cash register at the mountain base warming house. One Friday afternoon at the end of the shift, I went up to the office to cash out. The restaurant’s assistant manager, Fred, an oily, pornstachioed guy in his thirties, said he needed to speak with me in the manager’s office. I followed him in, impatient to get in a couple of runs before the lifts closed.

A uniformed policeman with a comb-over was in the office along with the manager, the resort general manager, the head of security and two of his lackeys, and Fred. All eyes were on me, as if I’d just jumped out of a cake.

The cop said, “I understand your drawer was short.”

Wow. They were real sticklers about reconciling their cash up here. I started to get a little concerned.

Officer Comb-Over said, “We have a sworn affidavit that says you purposely under-ring items and pocket the difference.” (Sworn out, I learned later, by a tourist from Iowa. He is the personification of why folks say that IOWA stands for Idiots Out Walking Around*.)

My jaw hit the floor.

The managers stared hard at me, nodding a little, as if they’d expected this sort of behavior out of me all along, or like they were inspecting cured meats.

Now, I’m no angel, of course, but my evil-doing is more of the self-destructive variety. I was never ambitious enough to steal, and I definitely am not mathy enough to calculate, like, numbers in my head while pulling off such a scheme.

“Would you empty your pockets, please,” the cop said.

All I had was a quarter, which, to my shame, I threw at him. By this time I was about halfway between berserk, panic-stricken hysterics and DEFCON 1, so I was swiftly losing control of my gross motor skills.

He picked the coin up and turned it over in his hand like it was the Great Star of Africa, as if this confirmed the allegations.

“The witness said you took a roll of bills out of the register, held it up and said, ‘I got a tip!’ and shoved it in your pocket.”

“We’re going to search your locker.”

They went through my coat and boots, and of course, there was nothing there ($3.35 an hour, remember?). We went back in the office. Once inside, Fred locked the door. Me and seven men in a locked room.

“We have a new theory,” Officer Comb-Over said, his hands clasped behind him, pacing.

A new theory. Like they have teams of detectives in a race against time to crack the code of my evil genius. One minute I’m a nineteen-year-old slacker ski bunny, the next a criminal mastermind about whom police have “theories.”

He whirled around and stabbed a finger in the air. “Who are you working with?”

If I hadn’t been slobbering, jabbering terrified, I would have busted out some 1930s underworld slang. “Me and this bird, see, was bumping gums on the blower about a box job, see, because we was out of cabbage, but I don’t want to end up in no Chicago overcoat, see…” Something like that.

“Who’d you give the money to?”

The area manager, a toothpick of a man, steepled his fingers and said, “If you’ll give the money back, we’ll drop the charges.”

“But I don’t have anything to give you,” I said, although in my delirious state I imagine it sounded more like buh ahdone havnithin duhgivya.

The seven men, my judge and jury, conferred.

“We’re going to bring a matron in here to strip search you,” the cop said.

All the air went out of me. I forgot how to inhale. I was shocked to find I hadn’t wet myself.

The matron arrived and took me into an adjacent attic-like room with no heat. I took off my clothes and she poked through them while I shivered and blubbered. (Note: this is the real reason you should always wear new underwear. Every day. Forever.)

She found nothing, and the disappointment on the gathered faces in the next room! They dismissed the matron, locked the door again, and the seven men interrogated me for another three hours. Officer Comb-Over tried to wear me down, tried to trip me up in my web of lies. Asked me the same questions over and over. Made it clear I was going down no matter what. No more skiing for me. No more college. Prison. Getting shanked in the shower as I reached for the soap on a rope. I’d watched enough teenage jail movies to know what happened Inside.

Finally, they all realized it was Friday night, time to party, and they wanted to get home, or to the bar, or to the Nautilus machines. So they told me to show up at the county police station on Monday morning for a polygraph test. If I passed it, I’d still be under investigation. If I failed, I would go straight to jail.

“And don’t tell anybody about this,” the president of the company said to me. “For your protection, of course.”

I went back to the dorm. “You are not going to believe what happened today,” I said to the first person I saw, a stoner named Dave.

Well, that bit of news capped off this perfect day. The rock star of comedy had met an untimely end, as had my wide-eyed innocence.

I called my folks and they told me to come right home. Needless to say, I didn’t go back to my cashier job. I didn’t go back to the ski area. I went to work in a factory in Denver, assembling electronic digital thermometers, which eradicated my ambivalence about returning to college.

I sued the ski resort, the county, Officer Comb-Over, and the Iowegian affidavit swearer-outer. Three years later, I got a cash settlement, one-tenth of the original amount. But I never actually got the money, so it didn’t really matter.

But that’s a story for another time.

*Forgive me, o Iowegian friends, for pulling that one out of the sack. I know you’re not idiots. But that guy most certainly was.