Blame it on the Boomtown Rats

In my second senior year of college at KU (long story), I lived in an ancient studio apartment building across from the Beta and ATO frat houses on Tennessee Street. It was so old it had dumbwaiters in the halls and murphy beds in the apartments. The closet was only three feet wide, and the bathroom had a claw-foot tub and no shower. Immense gleaming purple slugs patrolled the crumbling sidewalk out front. The first night I moved in, some guy had an LSD freakout and cannonballed through a window.

But once I got rid of the cockroaches* and scoured the place, I loved it. The branches of oaks and sycamores filled my windows, sunshine through the leaves painting my walls brilliant green in the spring and summer, and apricot and scarlet in the fall. In wintertime, the strong black branches cast vigilant shadows and supplied pedestals for fantastical snow sculptures. 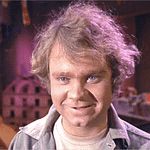 I had a night class fall semester, and walking home one night, I heard a bicycle approaching me from behind. I turned to look. A forty-something dude about my height who looked like a creepier version of Michael J. Pollard was pushing the bike, not riding. Apropos of nothing, he let out a nervous, Peter Lorre-type laugh. In my mind, I heard the eerie opening strains of  the Dead Kennedys’ “The Prey.” I walked faster.

By the time I got to the front walk of the apartment building, his giggles had climbed the lunatic scale to near hysteria. My pace had escalated to a run, and he was right behind me, giggling madly. As I raced him to the door, he rolled his bicycle over three of the fat slugs, bisecting them with a wet squish, and up the steps. I sprinted down the hall and fumbled with my door key, ready to yell for help. But as I turned toward him, he disappeared down the staircase, bike and all, to the basement. I heard a door open and shut down there.

Okay, so a weirdo lived below me, who I discovered later had an equally weird Al Capone-lookalike roommate. I shouldn’t have been surprised. The rent was super cheap, it was just down Mount Oread from campus and three blocks from downtown, and it was a couple of blocks from Bullwinkle’s, a tiny dive bar that wasn’t much more than a lean-to with a tap and a kick-ass jukebox. At least my totally BA upstairs neighbor, Lori Elliott, had been followed by the bike-pusher too. We agreed to do laundry together in the basement to make the giggling and doorway-lurking bearable. 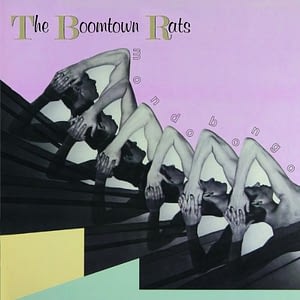 One Saturday night, I skipped the bars and stayed at home to listen to a Boomtown Rats album I’d just bought from Exile Records and Tapes, the local used-music and head shop**. I sat on the floor, ready to drop the needle on track one, side one. But just as I lifted the tone arm, I heard moaning directly below me. I froze and listened, the needle poised above “Mood Mambo.” The moaning voice belonged to Michael J. Lorre. I replaced the stylus in its cradle and pressed my ear to the floor.

The noise that surged from the basement sounded like the bawling of a wounded calf. And above that disturbing noise came the roommate’s voice.

Come out of him? Just what the actual hell was going on down there?

“Get thee behind me, Satan! I command you to come out of him!”

Holy shinola. What I was listening to was an exorcism.

And then the wild rumpus really got started. There were shrieks and shouts, dishes crashing, glasses shattering, furniture splintering. There was repeated hollering for Satan to come out, and then little Michael J. Lorre started babbling at the top of his voice. Al Capone Junior joined in.

They were, I realized, speaking in tongues. They sounded like a couple of liquored- and coked-up auctioneers having an epic rap battle. This went on long enough for me to pour two fingers of Jack Daniel’s into a glass and re-seat myself on the floor.

After one final crash, Michael J. Lorre laughed and cried with relief. I imagined ACJ untying him from a chair, and the two of them hugging and crying.

It was over. Satan had left the building.

Because this was the first Saturday night I’d stayed home since moving in, I wondered if getting in front of the devil was a weekly event in Chez Lorre-Capone. But I was too interested in unleashing Bob Geldof and the Rats to ponder this for long. I once again raised the tone arm, but my downstairs neighbors beat me to it. I heard a needle fall on a very scratchy vinyl record. And then a familiar Welsh voice silenced me and my 36-inch speakers for the night.

Well, of course. This explained everything. The guy who crashed through the window wasn’t on LSD after all.

He was on Tom Jones.

*Powdered boric acid sprinkled liberally around every baseboard and crack in the apartment does the trick. The roaches walk through the powder, and it sticks to their legs. They carry it back to their nests, and the boric acid dissolves the eggs. Gross but effective.

**My 21-year-old daughter Chloe was confused by the term “head shop.” If you’re also confused, it means “drug paraphernalia shop.” Back in the day, stoners were known as “heads.”

Below you can listen to a playlist with the songs mentioned in this post, as well as some extra goodies. The first one to guess why I included “Foggy Mountain Breakdown” wins a prize.